In July 1835, African-American pioneers Hansel Roberts, Elijah Roberts, and Micajah Walden journeyed to the federal  government’s land office in Indianapolis to purchase homesteads in northern Hamilton County, thirty miles to the north. Their claims had been intentionally chosen to be within several miles of Quakers, a group known to be accepting and supportive of free blacks. In October 1835, the men brought their families to their wilderness claims and settled permanently, thereby establishing a farm community later known as Roberts Settlement. By 1840 the neighborhood included about 10 families and 900 acres of land.

People of mixed African, Native American, and European descent, the first Roberts settlers had been raised in eastern North Carolina, an area where their families had lived as modest, well-respected, free landowners for at least a generation before the American Revolution. They migrated to Indiana’s frontier in large measure because their freedom seemed in jeopardy. During their lifetimes, slavery in their native land had become far more concentrated, and fears of slave unrest had mounted—the South’s three largest post-1800 slave uprisings, including the 1831 Nat Turner Rebellion, all erupted within one hundred miles of their homes. As a result whites had come to view free blacks with great suspicion and steadily whittled away their economic, social, religious, legal, and political rights. As early pioneer Long Jim Roberts put it, free blacks in their former homes had become “trapped in between two fires,” caught in the middle of the struggle between whites and slaves.

Life at Roberts Settlement during its formative years was in many respects daunting and uncertain. A severe national depression in the late 1830s and early 1840s followed close on the heels of the community’s founding, slowing the pace of its initial development. The neighborhood grew to 16 families totaling 112 residents in 1850, but most of the increase occurred only after better conditions returned. Heavily forested, the Roberts area remained thinly settled and isolated. With travel slow and difficult, families relied heavily on self-sufficiency, shared labor, barter, and credit rather than cash-based trade to make ends meet. Early residents also had reason to worry about their precarious status as free African-Americans. The frontier’s rough character and isolation left individual blacks especially vulnerable to white depredations. In 1841, for example, a black settler in southern Hamilton County was kidnapped and sold into slavery; two years later abolitionist Frederick Douglass was severely beaten by an angry mob when he attempted to speak in Pendleton, twenty-five miles from Roberts Settlement. White Hoosiers’ general tolerance for the blacks in their midst also grew more tenuous, the result of increasingly negative views of African-American character stemming from the national debate over slavery. Article XIII of the state’s 1851 Constitution prohibited further black settlement, a sign of the depth of white resentments.

"Life at Roberts Settlement during its formative years was… daunting and uncertain." 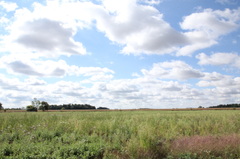 Roberts Settlement’s early struggles nonetheless ultimately gave way to permanence and greater security. From the 1850s through 1870s, a time later generations would later recall as the community’s golden era, the neighborhood experienced exceptional prosperity. Farming itself became steadily more promising and rewarding after mid-century. The opening of the nearby Peru & Indianapolis railroad line in 1853 brought residents much easier access to farm markets and, in turn, the ever-growing cornucopia of clothing, household goods, and other mass-produced items being introduced during the Victorian Era. The railroad also drastically reduced the settlement’s isolation. Farm prices for corn and pork, meanwhile, became steadily more profitable, rising steadily faster than inflation through the late 1860s. Roberts families, like those of their surrounding neighbors, seized on the new dynamic. Forested land was cleared at an increasing pace, new farm machinery was adopted as it was introduced, and log cabins were replaced by frame houses. Attracted by Roberts Settlement’s good fortune, more than a dozen new African-American families with the resources to purchase unclaimed land on the settlement’s fringe arrived as well. By the late 1870s the thriving neighborhood had expanded to include 300 residents and nearly 2,000 acres (3 square miles) of land.

Racial intolerance and discrimination, while never disappearing, became less problematic as well. In the late 1840s the Roberts community church became affiliated with Wesleyan Methodism, an emerging Methodist sect initially distinguished by its staunch opposition to slavery and vocal support for racial equality. The congregation soon became part of a Wesleyan circuit composed of several local churches, many of whose members had formerly been Quakers. Quarterly meetings, revivals, and other religious occasions brought Roberts residents into frequent contact with their co-religionists, forging bonds between the Roberts and surrounding rural communities that were truly exceptional in their egalitarian character. The Civil War, meanwhile, brought increased acceptance in the larger world beyond the Wesleyan circuit. Emancipation and the participation of African-American troops in the Union Army encouraged expanded rights and a more positive view of African-Americans as a people. Indiana legislators in the late 1860s repealed the state’s most restrictive racial laws, extended voting rights to African-American men, and provided public funding for black schools. For the first time Roberts men, including several who served in Indiana’s 28th Regiment of the U.S. Colored Troops, became active in civic affairs through the local Republican Party’s organized activities. Two residents, William Roberts and Elijah Gilliam, were elected as township constables, a symbolic demonstration of the community’s improved esteem among local whites. 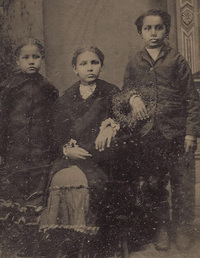 As Roberts Settlement prospered, its members shaped their neighborhood’s community life to their own liking to an extent often not possible for African-Americans elsewhere. The settlement’s school and church served as both community centers and the embodiment of residents’ values and highest aspirations. Having had limited access to formal schooling in North Carolina, the first settlers had placed a premium on education; school sessions were held from an early date in the community’s log meetinghouse. After 1870 a separate schoolhouse was established and public funding provided the means for improved instruction and longer school terms. By the late nineteenth century, adult literacy and school attendance rates at Roberts Settlement were on par with those of their surrounding white neighbors. The community’s other social pillar, its church, also evolved with the times. A white clapboard building with a steeple replaced its simpler log predecessor in 1858, with twice weekly services, church picnics, and other gatherings held within its walls or on its surrounding grounds. With the fight against slavery complete, Wesleyanism shifted its social emphasis more fully to the need for personal moral reform through opposition to drinking, gambling, and other social ills. As in other contemporary Protestant denominations considerable stress was given to the then-emerging middle class ideals related to self-control, moral improvement, respectability, and refinement—ideals that resonated well with Roberts residents.

After the 1870s farming at Roberts Settlement afforded fewer opportunities. By 1900 the neighborhood’s population included only 150 residents, and by 1920 fewer than 50 remained. Declining farm incomes, the consolidation of farming, and the lure of urban life took their toll, much as they did elsewhere in rural Indiana. Many of those coming of age in the decades surrounding the turn of the twentieth century pursued successful careers in urban African-American communities as businessmen and professionals, most frequently as ministers and teachers. In essence they were able to leverage the advantages of their Roberts Settlement upbringings as they moved to towns and cities, much as their parents and grandparents had leveraged theirs in the migration from North Carolina to the western frontier. Several attained regional or national acclaim. Dr. Carl G. Roberts became a prominent Chicago surgeon and president of the Negro Medical Association; the Reverend Dolphin P. Roberts ministered to African Methodist Episcopal congregations in several large cities and became the national church’s highest appointed official as Recorder of Deeds; and the Reverend Cyrus W. Roberts served nearly fifty years as a Wesleyan, then A.M.E., minister across the greater Midwest. Many more gained local or state acclaim. Still others settled in surrounding towns and cities and, despite working in less skilled or menial positions, managed to purchase their own homes; often their children subsequently rose more firmly into the ranks of the black middle class. 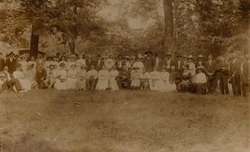 In the mid-1920s, growing self-awareness of Roberts Settlement’s special heritage led former residents to organize annual homecoming reunions, establishing a Fourth of July tradition that has continued to the present day. At the first gathering Cyrus Roberts, who grew up in the neighborhood during its most prosperous days, proclaimed to the assembled  celebrants that:

Our religious and educational facilities and opportunities have not been excelled in the past, [and] our religious influence and intellectual ability. . . are known far and wide. . . . [Today] our talent is sought and the name “Roberts Settlement” has become a synonym, not only for greatness, but also for honesty and uprightedness wherever spoken.

The themes of Roberts’ address —the community’s exceptional place in African-American history and its enduring legacy for its descendants—struck responsive chords for those in attendance. They helped define the community’s special character; affirmed their own success as black Americans in moving beyond the farm neighborhood; and offered hope and promise for those following in their own footsteps. Subsequent Roberts homecomings have continued to celebrate the neighborhood’s past as well as its legacy. The reunions have evolved over time—golf outings and hay rides, for example, now supplement the homecoming gathering itself—but their appeal remains constant, grounded in their forebearers’ ability to protect and maintain their relative advantages from one generation (and one setting) to the next, time and again.
Written by Stephen A. Vincent, Ph. D.
Copyright 2014
Listed on the National Registry of Historical Places by the Department of Interior.
Powered by